Sometimes, the truck addiction just comes over me…

It’s Thursday and I check my Twitter feed and I see a Hanu Truck is out in Durham again.  I’m bummed because I can’t make out, because I really enjoyed Hanu.  I first learned of Hanu from my Twitter friend John (@HungryAsianRke) when Hanu had their first event.  My disappointment was short, as I saw they were out again at The Bar on Rigsbee in Durham on Friday.  So, I jumped in the car, revved the engine and headed for The Bar.  During the drive, all I could think of was the crunch and spicy kick of their Spicy Pork Bahn Mi.  So I ordered my favorite and rolled the dice on a their Peking Duck Slider.  The slider was pretty cool (tastefully and descriptively) with the Tzatziki sauce.  I told them I thought it similar to a chicken ranch slider, because of the coolness of the tzatziki (like ranch) and the similar texture poultry has.  Since it was nearby Fullsteam, I grabbed a nice tall glass of Beasley’s Honey White.

For more pictures on this adventure, check out my Instagram (@RUWandering).

After visiting, I had Pie Pushers’ wings and Local Porker. I tried the wings for the first time.  The first slight surprise, until I remembered their pizza oven, was these were baked.  The baking really made these winners with something slightly sweet and spicy, but more on a moist rub style.  I could start guessing what the spices are, but to be honest, I’d probably be wrong and I’m no expert (but I could stay at a Holiday Inn Express).  Also, because these were baked, they were not dried out from the high temperatures of a fryer.  I’m kicking myself for not ordering these before, but definitely will crave these at a later date.

As I wipe my fingers (I plead the fifth if those wings were finger licking good), I continued down Rigsbee to KoKyu BBQ to grab a slider and a taco.  I was going to stop at just a Sour Patch Slider, but the Pork Belly and Short Rib TaKos are hard to pass up.  I’m sure someone sitting at the picnic tables thought I was readying myself for battle of the mustard colored belt as those two items disappeared quickly.  At this point, my strides go from walking to waddling down Rigsbee.

Before I left, I stopped at Hanu Truck to say good-bye.  As I retraced my gluttony to them, they recommend this white truck parked next to them.  The truck didn’t have much, but a menu and black wording that said “Bo’s Kitchen”.  I had seen it in a picture posted by Truxie (@Truxie, a local food truck finding app for iTunes and Android), so I was even more intrigued after the recommendation. 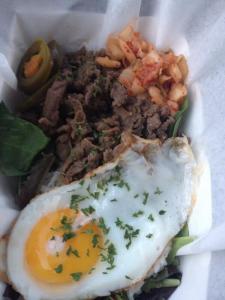 After looking at the menu, again calming my stomach, I ordered Bulgogi with rice and kimchi. When I look at the plate, even at my full state, I am amazed.  I shared some with my family and they loved it.  Looks like I found something here…

Next day, I headed down to a new brewery down in Fuquay-Varina.  Draft Line had its grand opening with various food trucks.  I ended up meeting up with Sol Tacos’ owner Schaumann to drink some beer and he sharse a Philly Cheesesteak from Philly’s.  I’ve always been a fan of Philly’s Cheesesteaks (I used to religiously go and drag co-workers when he parked at Pilot Mill), especially after having one in South Philly.  If you want a true representation, find this truck and prepare to enjoy. 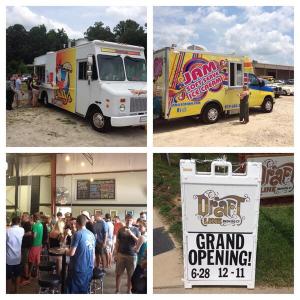 After a couple beers and a Chile-Brazil World Cup shootout, I headed back to Raleigh.  I made a stopover to Gizmo Brewworks to see the new Bo’s Kitchen again.  This time I grabbed some Pork Mandu, Korean Dumplings, which made my tastebuds say, “oh my goodness.” They were fresh, juicy, and made to order.  The family on the truck melts your heart as they are super kind and make some delicious food.

Before heading out to Pittsboro, I made a pit stop to check out Gouge Wrestling at Raleigh Brewing.  I wish I had stayed longer, but I kept talking about The Phoenix Bakery so much that I need to show it off to my mother-in-law.  They closed early in the evening, so stopped for some finger foods for the road.  The Maple Bacon Cheddar Bombs from Stuft and Pork and Chive Dumpling from Dump Pho King Truck were just what I needed for the drive. Also on the food truck card were heavyweights Captain Poncho’s and Chai’s Global Food. 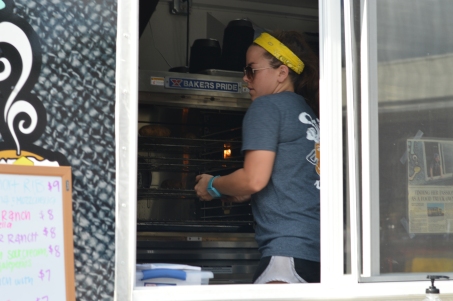 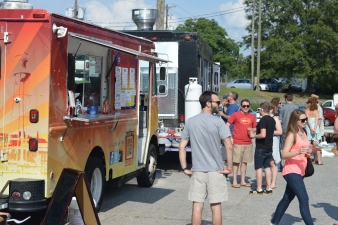 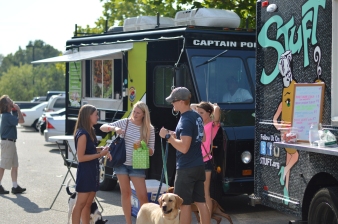 And so I headed west on one of the most beautiful drives in the Triangle down US 64 to Pittsboro.  While the last few rodeos had a large number of trucks, Pittsboro had a great rodeo lineup.  Tailgater Toby, Belgian Waffology and Gussy’s Greek Truck all parked across from Pittsboro Roadhouse. 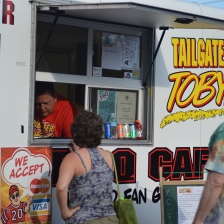 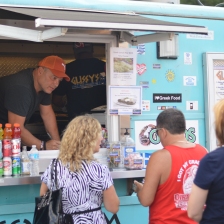 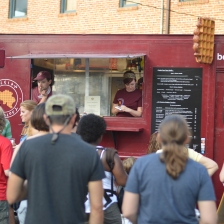 I also liked that some of the businesses stayed open in Pittsboro to explore.  We walked into a few shops like Circle City Books and Music and The Joyful Jewel, where I met Anora McGaha (@AnoraMcGaha), who is active with social media in the Chatham County area.

Even though Saturday was a long day, I made another small food truck run on Sunday.  I noticed on Twitter another truck, Taco Grande (@TacoGrandeNC) newly active on Twitter parked at the Marathon gas station at NC 55 and Carpenter Fire Station.  I grabbed an Asada (Steak) Torta with a pineapple drink.  The torta was delicious and I almost came out to repeat my praises.  Thank goodness I didn’t as I would have embarrassed myself in front of some customers who had pulled up.  The bread was soft, the cheese used was a queso fresco, the guacamole was on point, and the steak had very little, if no fat.  While my order was being prepared,  I spoke with the guy on the truck and he mentioned they will regularly be here and can find updates on Facebook (their preference) and Twitter. 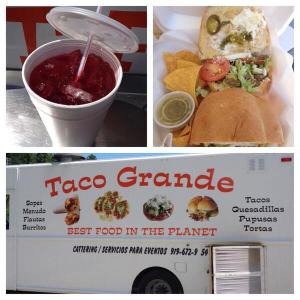 For the evening, I wrapped up at the Freedom Fest at A.E. Finley YMCA.  I got the heads up from my friends at Not Just Icing, which the line-up also include Barone Meatball, Chirba Chriba, Sarge’s Chef, Red Hot & Blue, Oscar Williams Cotton Candy, Jam Ice Cream, and Sno-Balls.  After live music, fun and games, and the sun set, the lit fireworks.  While I was busy working on a “project” that I will release in due time, I did enjoy a delicious bowl of Shrimp and Grits from what the nicest guys in the food truck business, Sarge.  For lunch, I usually grab the Shrimp Po Boy and sometimes the Shrimp and Grits for a co-worker.  This time I got to enjoy it for myself, not just the aroma in my car.  I really enjoyed this event and I will circle on my calendar again next year. 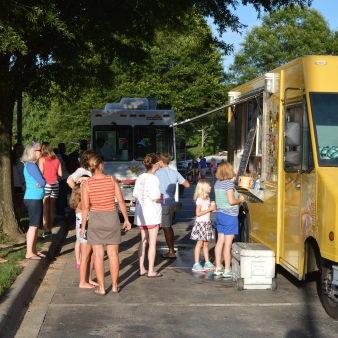 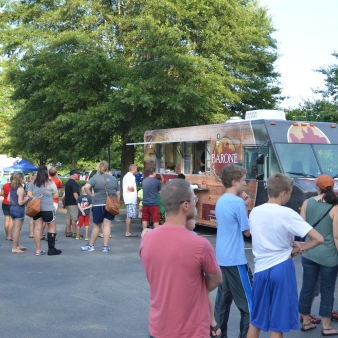 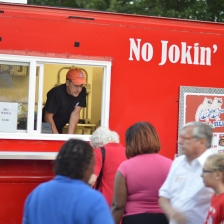 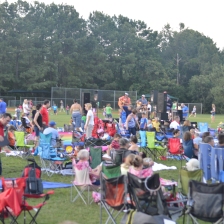 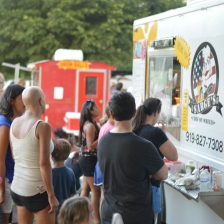 When I look back, I cannot believe all what I did this weekend.  If you missed these events, keep posted here and Triangle Explorer for events.