You think the worst of the business cycle is behind you.  You made it through the slow and cold months of January and February.  Your food truck season is ready to kick off.  Fresh off a great day yesterday at another Durham Central Park rodeo.  Bouncing off this great day, the week is getting better as you landed a spot as a food truck at the ACC Tournament in Greensboro.  Your on your way to meet your Dad, who’s already at the commissary preparing for the week.  As you wait at a red light, your whole life shifts another direction.

This is what I envision as Mike tells the story of that pivotal day.  He recalls seeing the drunk driver moving at a high speed.  And with I can’t believe this is happening fashion, the car swerves with violent force strikes and moves the MaMa Duke’s trailer.  “The car had to be going 5o to 60 miles per hour, ” Mike Alexakis, the son of MaMa Duke’s recalls.  While I wasn’t there to witness it, his commentary of the trailer’s aftermath is enough to mentally paint the damage this car did. 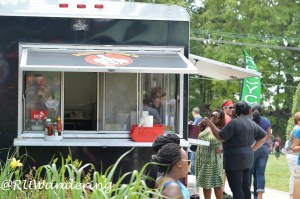 The driver hit the trailer’s “sweet spot” hitting between the six burner stove and two fryers.  Outside of the trailer itself, this area is the most expensive part of the business, as well as, the part that makes the most money.  The two fryers, both about 80 pounds each (half full with oil), were no longer in the same spot as they once were.   While the fryers only half full,  the oil inside the fryer still covered the inside the trailer and seeped into the diamond floor.  Describing it as a mess would be describing it with optimism.  In addition to the interior and obvious exterior damage, another key impact was the trailer hitch shifting from a straight position to an angle that could be one of an isosceles triangle.

As Mike tells the story, the only thing I want to do is listen. After talking about the accident, he mentions the accident’s aftershocks. After the accident’s adrenaline wore off, the Mike’s physical pain begins.  That day and the next he visits the hospital with back pain.  But that did nothing, as each day the pain get progressively worse.  He mentions he could have a few bulging discs in his back.

Though with all these lemons, there is some lemonade from all this.  While the business and personal savings have been drained as the food truck business just finished its hibernation cycle, Mike’s wife had to quit her stay-at-home mom job and enter the workforce.  This gave Mike more time with his son’s, who just turned one this week, in exchange for 12-15 hours a day in the food truck business.  The other surprisingly positive thought is the “what-if” in the whole situation.  If Mike was without the trailer that day, a car could have been where the trailer was that morning.  It’s possible, on a Monday morning that a car would have been there.  If so, that car’s fate would be similar to the restaurant equipment and trailer, but perhaps more fatal.

Though this story isn’t being told by Mike to get pity.  He’s telling me (as I am telling you), because I am interested.  While the income has stopped, the savings have been drained, the bills are still coming.  The bills aren’t lavish, they are the normal expense we all have: living expenses.  While the trailer was insured, it was ruled a total loss (after a long process).  The proceeds were just enough to cover the trailer.  However, they weren’t able to salvage anything bolted down and those daily bills are still waiting.

After looking at all that occurred, Mike announced MaMa Duke’s is closed.  Which led to fan and friend’s reactions.  Mike never wanted to start the GoFundMe page.  It’s not his character to do so.  But, friends and fans kept asking and encouraging him to do so.  So there is no surprise within a few days, funds quickly posted to the site.  The other non-surprise is the funds are not just coming from food truck fans.  The funds are coming from other food truck owners, too.  In addition to the owners, Fullsteam Brewery (a frequent Thursday spot for MaMa Duke’s) stepped in and offered to match donations made until Sunday via a Facebook post.  The support for the would have been 3 year business is just something Mike could not be more thankful for.

While Mike has said MaMa Duke’s is closed, because there is nothing financially to start a new trailer, I ask him “would you do it again?”  Without hesitation, if he had the money he would.  While operating the family’s South Boston restaurant was fun, he really enjoyed working the food truck business.  He liked the view from the kitchen where a fan was enjoying his food and the fan’s response of a thumbs up.

To donate go to their GoFundMe page and donate.  After you donate, please go to the Fullsteam Facebook Page (see this post) and make a comment on your donation.  Sean also mentioned you can email him directly, if you don’t your donation to be made public.

Here are some pictures of my MaMa Duke’s experience: