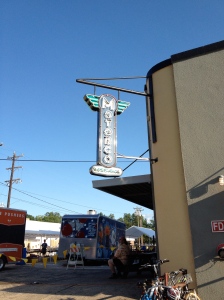 Motorco Music Hall (Rigsbee & Geer Street, Durham) is a frequent spot for food trucks.  Across from Motorco on Rigsbee is also Fullsteam Brewery, another hotspot.

Raleigh can boast itself as the Capital City, the larger city, and it’s claim of first in the city pair (RALEIGH-Durham), however, Durham can arguably claim “NC’s Capital” for food trucks.  My first taste of food trucks was the random truck that served churros on a hot summer’s day at a corner gas station or the lunch truck (or known as a roach coach).  Though, my lack of intelligence should have thought of the lunch truck that the female hero owned in the movie, Short Circuit.  This was the one that the robot Johnny Five hid in and later hijacked (never mind, this is a food article, not a movie synopsis).   Well, the “modern” food truck is much more than my first two impressions.  These seem to be mobile foodie mirage that appear and disappear in various parts of Durham’s city.  Since these food trucks don’t have a physical address, you want to either plan ahead by checking their various web avenues (Facebook, blogs, Twitter, Four Square, etc.).  A good source is Twitter (next to each food truck), since the trucks post their locations on through their Twitter feeds.  With a Twitter mobile app, the hungry can scroll the recent tweets to find the nearest truck and enjoy.

I am a newbie to this, but have been fascinated of them.  In fact, any opportunity I can – I will follow them like Phish/Grateful Dead/Dave Matthews Band groupies (but, not in the creepy “thanks for the restraining order” kind).  Before I lose your attention, here are a few that I tried and enjoyed:

Valentino’s (@ValentinoTruck):  As the name implies, this is your good old-fashioned Italian food truck.  You can easily order calzones, pizza bread, and wings from these guys.  One item that was recommended before I walked up: the Pale Ale Poppers.  These jalapeño poppers are stuffed with pork and cheese and deep-fried.  Instead of going with the typical ranch, go with the Sweet Thai sauce, which is unbelievable.  Not crazy spicy, but enough for those wanting to escape the bland.  The pizza bread and meatball calzone tasted better than your regular Italian restaurant.  The part that really sold these items was the marinara (or gravy, for the purist).  I am not sure if it was the tomatoes or the herbs mixed in it, but the marinara was good by itself.  This truck is very friendly and is willing to chat and joke with you.

KoKyu BBQ (@KoKyuBBQ): This truck is your Global/International fare.  I ran into this at the Doughman’s Banquet, where I only tried the V-Takos.  At first, I thought the guy said Beef Tacos.  I didn’t care, because I will eat anything once.  Well, this loaded taco was freshly cooked and waiting for me in the truck’s window.  This taco had cilantro, mango, bean sprouts, sesame seeds, and a spicy chili/teriyaki sauce.  The tortilla also looked like it was fried for a couple minutes – not seriously deep-fried, but enough to have a little crisp.  Well, I devour that quickly, not before I noticed the meat had a color a little lighter than beef.  I soon noticed it was tofu!  I am not a vegetarian, but I don’t turn down tofu.  I was plenty surprised that everything together made a great bite.  While I was munching on my second taco, other foodies told me that the Duck Fat Tots are a hit.  Well, looks like I am adding them to my Twitter Feed.

Pie Pushers (@piepushers):  Now, who doesn’t like a good tasting piece of pie?  Well, if these guys are pushing – I’m eating.  They were pushing hot small pies of Goat Cheese and Salami.  Both pies had some greens with a very light, refreshing lemon, pesto vinaigrette.  These guys knew their target audience, as I would want both a salad and a pie.  Well, guess what you got both and you really don’t need a fork, either.

American Meltdown (@AmericanMLTDWN):  Who does not like a good Grilled Cheese sandwich?  Forget your mom’s recipe of butter, bread, and slices of American cheese.  This is the trending “grown-up” style.  We tried a regular item, Hangover, and a special item, Beer & Bacon.  Who says no to bacon?  This sandwich was delicious with a nice salty finish courtesy of the bacon.  However, the Hangover surprised me.  The egg, the salsa, the pimento all formed a team to defeat my appetite.   In order to save my marriage, my half – became a fourth, as my wife claimed my remaining piece.  This results in awarding the sandwich high honors, due to her selective palette.

Chriba Chirba Dumpling (@ChirbaChirba): As the name describes, this is a dumpling truck.  I am a fan of pork dumplings.  So, I am waiting for a fast food restaurant to pack these little guys into a popcorn box.  Then, I can rapidly fill my stomach with these little delicious guys.  If Chirba Chriba invents this, for the sake of my health, don’t build one across from my work or home.  Again, this truck had a vegetarian item and meat item to try.  I went for one of each and did not frown on either one.  As suggested, I scooped their homemade Szechwan, chili pepper sauce and smeared my dumplings in it.  These poor dumplings disappeared before my taste buds could see what they ate.  Another truck to follow – thank goodness, gas prices are falling!

The Parlour (@parlourdurham): After stuffing yourself with these trucks, the taste buds want dessert to finish the meal.  The Parlour will gladly fill this request.  I tried their Salted Butter Caramel ice cream with strawberries.  This was the finishing move to my day.  The saltiness did not overpower nor did the sweetness of the caramel.  And the strawberries kept your palette from being bored of a single flavor. All the ingredients are local, so very fresh with no hints of preservatives.

As the day rolled on, my food coma was about to set in.  Unfortunately, the spoils of this war meant an extra hour of activity or a dirty look from the doctor.  If that activity never happens (it seldom does), well doctor – I am scowling back!

As the mind wanders…