Objects in the Rearview Mirror

Food Trucks Give Back 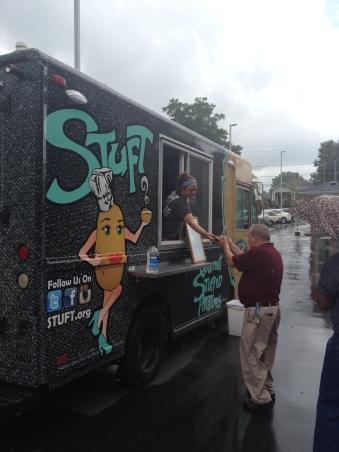 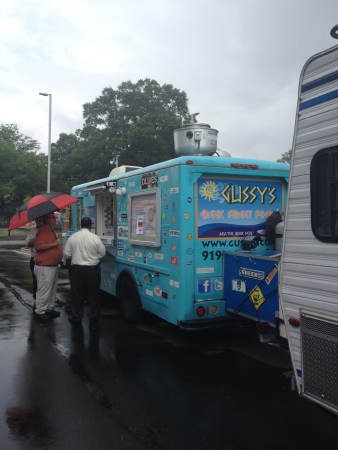 I have this list of things I want to show what food trucks do.  One is how trucks give back to the community.  Last Tuesday, I tried my best to show what food trucks can do.  I didn’t know the full details except the line-up and that it wasn’t for the public to enjoy.  Gus from Greek Gussy’s grabbed Chick-N-Que, Not Just Icing, and Stuft to give back to the Rescue Mission in Durham.  It rained that day, but they still gave out food to the homeless. It was such a warm feeling to see and I imagine for them as well.  If you didn’t catch the broadcast, here’s the coverage from Anthony Wilson on ABC 11. 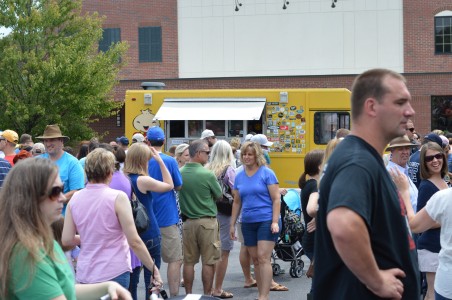 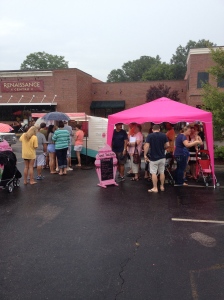 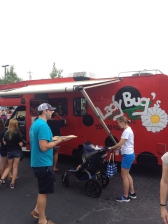 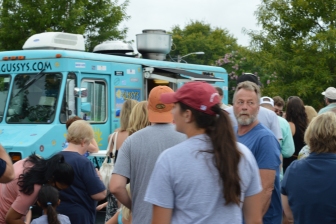 Taken about 30 minutes in, the lines grew quick and strong.

Did I think this was going to be a rodeo well attended? Yes.  Did I expect what I saw? Maybe.  I didn’t see Cary’s Chatham Street Chowdown, but I expected the same atmosphere.  From what I saw, it was well attended.  Wake Forest was dedicated as when the rain fell in the middle rodeo, many stayed.

I’m not a morning person, but I didn’t want to miss the first time Wicked Biscuit, Belgian Waffology, and Caffe Bellezza will be together in one spot.  I arrived slightly after 7, but ABC 11 was already there filming for their morning broadcast.  I tried to find the video for it, but I could not.  Sheyenne Rodriguez was the reporter and had a few tweets with Belgian Waffology and Wicked Biscuit.   From what I saw afterwards it was a success, as Wicked Biscuit sold out by 9 am (before the 10 am shutdown).  This does look to be  a regular event, so plan Fridays in Durham for breakfast!

Last week, I got word that Our State magazine published an article from Kim with Street Foodie Diaries.  I am a huge fan of their work and try to support them as much as I can.  I think Steve and Kim really helped connect the wires in my brain to help steer away from focusing on the food and really incorporate the people.  Anyways, they are really making a push n Season 2, which is featuring the Atlanta food truck scene.  If you haven’t seen their first season, based here in the Triangle, you’re missing out on some great work.

Should I dare list all the trucks attending?  They have announced  over 50 trucks up and down Fayetteville Street with a few intersecting street with trucks.  The event is August 10th (Sunday) and thankfully from 4-9 pm after the summer heat will die down.

Slingshot Coffee: Party at Our Place

This Friday, Slingshot is throwing a bash.  Normally, I would add this to the Friday events.  However, with an RSVP mentioned, I wanted to put this out now.  The event looks to include The Parlour, a successful food truck that opened an ice cream parlous near the Downtown Durham Marriott.  Thanks to Triangle Explorer for the heads up!

Events on the Map

Daily I am catching updates for this event, which looks like the planning stages are coming into full swing.  I won’t go into full details on the beer, but I did notice beers outside of the Triangle are participating (like Old Mecklenburg in Charlotte). Though food trucks are now being announced with Stuft, Tailgater Toby, and Not Just Icing in the mix.  Music includes Dark Water Rising, Lynda & Pattie, Skinny Bag of Sugar, and The Honeycutters as music.  The event is September 27th at Sugg Farm in Holly Springs.

New Kids on The Block

Who’s new to the radar

As the Triangle grows, the more diverse our food truck scene develops.  Recently, I had an opportunity to try Halal from Halal Brothers.  This is my first opportunity, but based on the ingredients used I thought it was pretty good.  I went with a kabob platter with saag and humus.  Be sure to follow them @HalalBros or check out their Facebook page.

Alison at Get Iced Cupcakes has been working hard this week posting pictures of her upcoming location at Poyner Village near Triangle Town Center.  Last update, I saw was an inspection.  I have my fingers and toes crossed for a passed inspection and opening announcement.

On Saturday, July 19th, Olio and Aceto opened their cafe to the public.  If you haven’t tried them yet, they are famous for using the beers at their brewery stops and making menu items out of them.  The cafe is in Chapel Hill near the cross streets of US 15-501 and Elliot Rd (400 S Elliott Rd, Chapel Hill).  Also the truck will still be on the road hitting some your favorite breweries like Raleigh Brewing and Fortnight Brewing.

Cake and Cupcake fans are waiting for that egg timer to chime.  LeAne continues to hint a huge announcement (and a Grand Opening?!) on Twitter and Facebook.  Unfortunately, the Bellagio no longer takes my bets on food truck action, but I’d be all-in on a storefront or bakery opening soon.  I hope my hunch is right as LeAne and Roland are great people, their cakes look beautiful, and cupcakes are pretty darn good.  You can grab cupcakes during the weekends at their kiosk in Triangle Town Center Mall (near American Eagle)

While driving down Glenwood, I noticed Big Mike’s was no longer at View Bar.  While I was sad to see they were no longer there, I did see that they have signed a lease for a spot in Cary.

Sarge’s Chef on Wheels opened on July 7th in Rolesville.  The restaurant’s hour are weekdays from 6:30am-2pm  for Breakfast and Lunch at 400 Southtown Circle Rolesville.  If you are a fan of Julius’ Shrimp and Grits and Po’ Boy like me, you are probably excited about making it to his storefront.

Will and Pops and Not Just Icing Food Bank Collection

We a few more days for this food bank collection.  If you see Will and Pops or Not Just Icing, please try to help them collect non-perishable items when on the road for Central and Eastern North Carolina Food Bank.

@NotJustIcing and @willandpops collecting nonperishable food items in July for @FoodBankCENC. #food trucks give back

A really cool guy I’ve met on the food truck scene, Steve, is doing a kickstarter for new equipment and help start-up a web cooking show.  If you have ever been to Lonerider Brewing on a Thursday, you have tasted Valentino’s great creations.

If you got news, feel free to message via Twitter or complete the contact form on my About Page.