Another story from my recent trip to the Pacific Northwest.  The beginning of my trip started in Seattle and it didn’t take long to find food trucks (without even actively looking!)  I was able to try a few, but I did include some of my notes and resources to help you find food trucks on your next trip here.

I can take a break from life, but it is hard to take a break from food trucks.  After wandering up and down Elliot Bay’s coast from Pike Place Market, we returned to our hotel to relax.  It was long day yesterday and it was starting to set in mid-afternoon.  As we walked back toward the hotel on Pike Street, my sixth sense tingled.  As my other senses began to register, my gut reacted like a strategic general getting his men ready for battle.  The eyes say colorful trucks, the ears heard the calming hum of generators, the nose smelled delicious aromas, now the other two were jealous and begging to get in the game.  We found: 2nd & Pike.

Now, I just ate lunch in the market. So, I this Patton-like speech had to occur.

“Stomach, you may have had self-proclaimed World’s Best Mac & Cheese (Beecher’s) and half a grilled cheese.  But what we have in front of us, we may never get an opportunity to experience again.  We’ve traveled many miles and had to deal with a lot to get here.  Now, three senses agree this is a battle worth fighting for.  And for the other two, well… do you have it in you to tell them no.  So what we need you to do is get in the trenches and let us all enjoy this culinary ride.  Because we can’t go home with out this… We NEED to do this.  So what do you say?! (… gurg)  I can’t hear you  (… grumble…) I thought heard something (GRUMBLE GRUMBLE)”

I excuse myself to the patron gazing at the window, as the stomach leads the charge.  The eyes begin reviewing the following trucks in front of us: Nosh The Truck, Plum Bistro, and Gourmet Dog Japon, a 2nd & Pike staple. 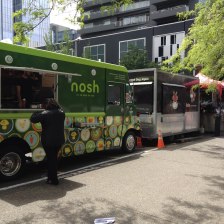 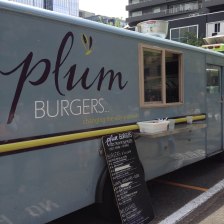 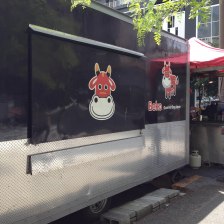 Gourmet Dog Japon served hot dogs with a wide variety of toppings. The one that still sticks to my head is a hot dog with Kimchi. That alone gives you a taste of their menu variety. Plum Bistro offers 100% Vegan and Organic items tricking my carnivore side with the menu category, Burgers. Had I not eaten, I would have explored Kale Caesar Tempeh or Buffalo Portobello burgers. I do like they offered Gluten Free options on most of their options. 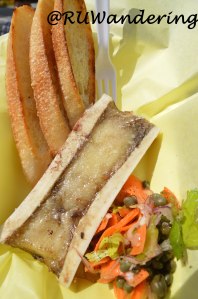 Nosh The Truck had one item that was a gastro tractor beam, Roasted Bone Marrow. As I ordered, my lips smacked as I thought of eating bone marrow.  As the truck prepared my order, it felt like time was forcing the second hand not to move.   And then my hands got hold of that basket of bone marrow, bruchetta, and salad (capers, carrots, lettuce, and lemon).  Before I dove mouth first into the basket, Nosh clued me on stacking it all together before that dive. What a great recommendation!. The toasted bread gave a nice crunch, the juicy, oily meat, and the zesty salad gave it a refreshing feeling. It was tough to tease my sense on just this small initial bite.

Another item that got my attention, but did not try, was the British Fish & Chips. Served as authentic as you can on this side of the pond, the fish is served with minty mushy peas and true to tradition sized chips (fries, for those not familiar with the alternate term). I can only imagine the fresh local seafood Seattle has to offer. 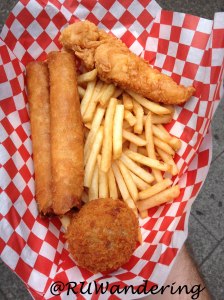 A later visit to 2nd and Pike provided another line-up with Gourmet Dog Japon. This time Curb Jumpers and Chick’n Fix were here. Wanting to try something new to the palate, I went with a sampler plate on Chick’n Fix. Lumpia, Bola Bola, and Chick’n Strips were all stacked on fries. Everything was fried, so nothing disappointed me. Lumpia is Filipino-style egg rolls, which was kind of like a flauta meets Asian egg roll. Bola Bola was another item I liked, which I would equate to Chicken Risotto balls – though more seasoned and less cheesy. If the two items before scare you, you can’t go wrong with Chick’n Strips. If you want to bring a bit more spice, they offer sauces outside the truck. I had mistaken a red sauce as ketchup, which was a hot sauce. It wasn’t a total loss, because I enjoyed dipping with it. 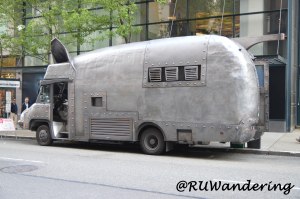 After visiting the trucks on 2nd & Pike, I noticed a mammoth of a truck parked in front of Niketown. At first I thought it was a Nike promotional truck advertising a new shoe. Onlookers walked by and some stopped to snap a few photos. I then began to wonder is a new Batman movie filming here, because it looked like the batmobile Christian Bale tore down Gotham City in. My excitement changed as I found out, it was a food truck. Then I mentally scolded all those photo takers who didn’t order from the truck. 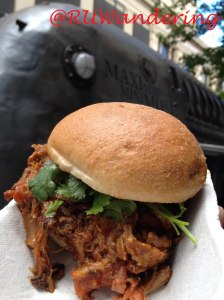 Maximus miniMus usually parks here on a daily basis. What I did not know was this truck is famous (Sol Tacos and Cook Eat Life later pointed out). The menu here is Pulled Pork Sandwiches, Grilled Chicken Sandwiches, Mac & Cheese and Slaw. Each has a Maximus, spicy, or a miniMus, sweet, option. Since the truck is a pig, I feel Pulled Pork Sandwich is a must. Since my wife frowns on “twang” (someone help me define this), she opts for the Maximus sauce. The Pulled Pork Sandwich comes with Pork and cilantro with options to add local Beecher cheese or Slaw. I was digging on Chick’n Fix, since my wife prefers BBQ. I did get a few bites of the sandwich. If I was talking to an Eastern North Carolina BBQ fan, I would be shunned for saying a non-vinegar base sauce was good (or anything positive for that matter). For everyone else, it was pretty good. I like the roll the sandwich was served on. If given an opportunity again, I’d stack it with the cheese, slaw, and put some Hurt (hot sauce) on it. 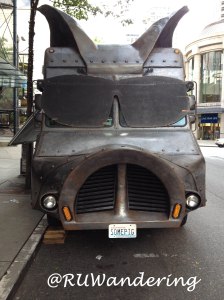 When I asked one of their next spots, they mentioned Belmont Sunday Market. I missed this event, but sounds like a huge market. If you are into outside markets and food trucks, you might want to circle this in your plans.

After visit a few trucks and seeing what others had to offer, I think Seattle is a must stop for food truck fans. Even staying Downtown near Pike Place Market and Seattle Center provides opportunities to see fine mobile cuisine. If you are visiting or interested in trying a food truck, here are some great resources:

2nd & Pike (near the City Target): Probably the most convenient spot for Seattle visitors. This location anchored by Gourmet Dog Japon and a couple other rotating trucks.

Fremont Sunday Market: I missed this one, but I’ll have this circled for next time. Wit 250 unique vendors and food trucks, it sounds like a must for outdoor market fans. http://www.fremontmarket.com

Great site to find on basic info and where trucks are: http://www.seattlefoodtruck.com