Objects in the Rearview Mirror

More like the Downtown Raleigh Food Truck Rodeo Coaster… Raleigh weather can really change in 24 hours where forecasts called for a washout this weekend.  Guy, the event’s organizer, quickly secured $4,000 in tents and tables in anticipation of the weather forecast.  Luckily, Saturday was the wash out and Sunday looked like a perfect weather day.  I think this helped fuel the crowds, as the rodeo attendees probably got cabin fever from Saturday.

If you missed this rodeo, the next food truck rodeo in the Triangle is Sunday, August 31st in Durham Central Park.  The next and final Downtown Raleigh for the 2014 series is Sunday, October 12th.  Tell your out of town friends and family… they are both on holiday weekends!

If you haven’t seen the results, I won’t spoil the article for you.  Last month, I tallied up the votes and announced the top 5.

A Very Brunchy Sunday at The Cookery

If you haven’t heard, The Cookery is opening its doors for a Sunday Brunch catered by Pie Pushers, cocktails by Alley Twenty Six, tastings by my favorite wine shop, Wine Authorities, and more from other Cookery members.  The Cookery is asking for attendees to RSVP, which will help them gauge attendance.  It has already had over 150 RSVPs, when I checked it.  For more information, see the event’s Facebook Page.

Update:  Did you see Beericana tickets were given away at Sunday’s Downtown Raleigh Food Truck Rodeo?  Follow them on Twitter (@Beericana) to stay up to date.

Keep an eye on me this week – I’m hoping to have some more updates on the brick and mortar location!

I’m happy to say Iced Cupcakes passed their inspection last week and had a soft opening shortly after.  I stopped over and really enjoyed the shop’s vibe.  The colors are consistent with Iced’s mail jeep (“Estelle”) and looks awesome.  It also has great view of the water between them and Shane’s Rib Shack.  The shop’s location 5911 Poyner Village Pkwy.

On Saturday, July 19th, Olio and Aceto opened their cafe to the public.  If you haven’t tried them yet, they are famous for using the beers at their brewery stops and making menu items out of them.  The cafe is in Chapel Hill near the cross streets of US 15-501 and Elliot Rd (400 S Elliott Rd, Chapel Hill).  Also the truck will still be on the road hitting some your favorite breweries like Raleigh Brewing and Fortnight Brewing.

Many of you like me were excited to here the Sarge set up base in Rolesville last month.  Right now, hours are just weekdays from 6:30am-2pm  for Breakfast and Lunch at 400 Southtown Circle Rolesville.  However, it seems fans like me have been asking for weekend hours.  Well, we are getting our wishes and we should see weekend hours posted soon.

Last Tuesday, Big Boss Run Club had their big run day for the first Tuesday of the month.  Both Triangle Explorer and I worked on the truck doing duties normally done by Cristal and Donna.  I was selling the cupcakes that John iced.  I have more pictures, as well as, later post to expand on.  We did put out a tip jar, which all went to Central and Eastern North Carolina Food Bank, as well as, $1 for each 4 pack we sold.  Turned out to be a decent charity to raise money as later that week, the Triangle food banks were looking for non-perishable food donations. 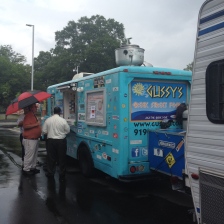 You may remember last month Gussy’s Greek, Chick-N-Que, Stuft, and Not Just Icing giving back at the Durham Rescue Mission.  Well, Gus is organizing another one.  The rodeo is not a public event, but an event where the trucks give food to those at the Rescue Mission.  If you are interested, get a hold of Gussy’s Greek (@GreekGussys).

A really cool guy I’ve met on the food truck scene, Steve, is doing a kickstarter for new equipment and help start-up a web cooking show.  If you have ever been to Lonerider Brewing on a Thursday, you have tasted Valentino’s great creations.

Last week, I got word that Our State magazine published an article from Kim with Street Foodie Diaries.  I am a huge fan of their work and try to support them as much as I can.  I think Steve and Kim really helped connect the wires in my brain to help steer away from focusing on the food and really incorporate the people.  Anyways, they are really making a push for Season 2, which is featuring the Atlanta food truck scene.  If you haven’t seen their first season, based here in the Triangle, you’re missing out on some great work.