Occasionally, I can convince a food truck owner to let me on their truck (or maybe it’s vice versa).  What they think they are getting is free labor, but actually I just want to get closer to the food.  I am sure on Admin day when they recall their food costs for that day, an abnormal increase in food costs and decline in revenues occurred.  This segment focuses on the cupcake truck, Not Just Icing.

If Unsolved Mysteries were re-released, the narrator will tell the story of how Triangle Explorer and I ended up on Not Just Icing.  Because to this day, neither one of us will claim responsiblity and quickly pass blame to getting the other on the truck.  Since this was the first time either one of us worked on a food truck, we searched the schedule to find a location and time that would work for us.  The date and time came up that was all to familiar, Big Boss’Run Club.  I had no problems with the time, but I wondered if Triangle Explorer would be hestitant working where people would know him in the running community.  Like a champ, he took on the challenge.

Not Just Icing is very protective of their batter and icing recipes.  Rumor has it that it is kept in a vault next to Coca-Cola and Colonel Sanders’ recipes.  Though the rumor has not been confirmed nor denied.  So, our shift started after Joy pulled up to Big Boss.  What many people may not know is, the truck doesn’t pull up ready-to-order.  The setup process is similar to packing and re-packing a box and shipping it somewhere.  So when a truck pulls up, there is the process of releasing equipment off bungee cords, moving things to their strategic kitchen areas, down to firing up the ovens or other cooking equipment.  The other component maybe unknown is when college students and young adults are stumbling into the Waffle House, food truck owners wish they could hit the snooze button over preparing for rodeos, festivals, and other largely attended events.

A unique caveat for Not Just Icing is that they strive to do the whole process on the truck, so when they make batters the have to lug on and off mixers and huge quantities of ingredients.  This is all part of the long hours of prep, “muttered” cussing and battle scars.

The first hour was more like orientation by getting a feel for the truck.  Since they pulled up about 5pm and the official run doesn’t occur until 7pm, there is a gap of people arriving.  Our orientation revolved around the roles were took on.  I took on the window, which primarily revolves around customer handling. The Triangle Explorer handled the food portion, which to me sounds the most difficult.  While the cupcakes have been baked, the process of icing to order is more than I want to handle.  The Triangle Explorer handles that Like a Boss. 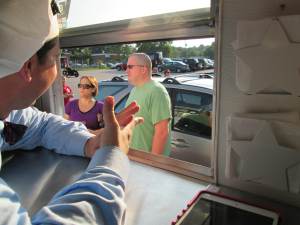 In between our orientation, non-runners on their commute home passby and order a few.  But the non-runners traffic started to pickup and soon we noticed, the vanilla cupcakes were down to a few.  In my mind, I panicked, “What are we going to do?”  Donna counted what we had and decided it was time to make more cupcakes.  Cristal led me to the back of Joy and showed me the generator and pointed to the cord.  I gave the cord a nice yank and a loud roar and rattle started.  I relayed that the generator was going, but it was so loud I am sure someone down the street knew.  I jumped on and The Triangle Explorer and Donna were grabbing cake pans and preparing to fill them with vanilla cake batter.  The ovens were preheating to 350, but Donna is meticulous and measures the oven with another themometer.  When the oven is perfectly set, they insert the cake pans and close the oven.  I can’t believe we are baking cupcakes on a truck. 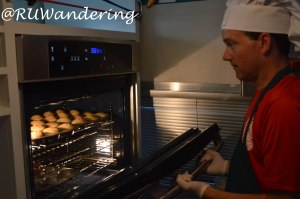 While we got to experience one part of the whole process, the experience was a blast.  The shift was not as big as a festival, but in small bursts you get a crowd forming.  I can only assume during larger events the cycle of baking, icing, taking customer orders, and the unexpected events that occur can challege you.

Since we blog as a hobby, we took the tips earned and donated them to the Central and Eastern North Carolina Food Bank back in August.  In addition, Not Just Icing donated a $1 for each 4-pack we sold.  In total, we raised enough money that equated to over 500 meals. 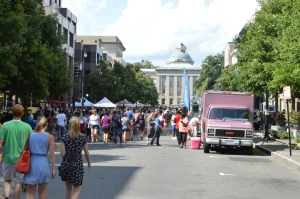