A new truck, Thai Street, has hit the streets.  Here are some quick facts on the food truck

The Triangle might be one of the hottest food truck markets going, which means new opportunities for new cuisines.  Thai cuisine is a new one that debuted this year.

Thai Street is owned and operated by a couple Nai (the chef) and Ed Rickles.  Nai is originally from the Nan province in the northern part of Thailand.  She loves to cook, which led her to wanting to operate a food truck.  They were in the Los Angeles area, but when they saw how vibrant the Triangle market was they decided to start a food truck here. 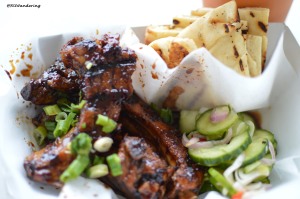 As I mentioned, Nai is from the San province.  This brings a unique cuisine that we don’t see at Thai restaurants.  For instance, I did not find Pad Thai (a popular choice in Thai American restaurants).  I did find different curries and my selection for the day, Sticky Thai Ribs.  This is actually Ed’s favorite dish, which I enjoyed for its sticky, sweet heat.  However, don’t get to close to a favorite.  Thai Street likes to source from local produce, which might mean a favorite might not be available that day.