I guess I have to admit when my friend, Triangle Explorer, posted about the Dump Pho King Truck, I thought it might be a joke. The tagline is two girls, one truck, the name is phonetically witty, but can turn-off a few.  Also, most Kickstarter, or crowd funding, usually take an established brand and push it to the next level. But this was the first Kickstarter I can think of where it came out of nowhere and was funded successfully. And if you were puzzled on how this happened, as was I, you never met Sophia and Sunny.

What I would call the birth of the Dump Pho King Truck (DPKT) was April 5th 2014. While the kickstarter (see the video that put them on the map) might be the biological reaction when the stuff that makes a living thing, before that there was an idea that had to be fertilized to get to that kickstarter point. And today those close to this dynamic duo (and maybe a few onlookers like me) gathered to see the unveiling of this truck. 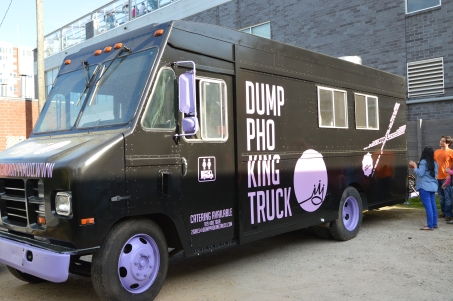 The section where customer will be served.

Photos were placed around the truck of its metamorphosis

Everyone commented on the kitchen’s size. 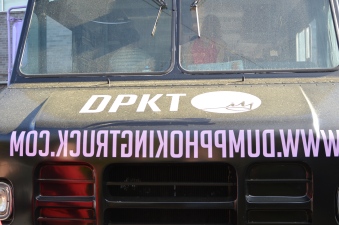 The pollen dulls the color, but the front looks sweet!

DPKT is a reality thanks to the optimism and creativity of two friends mixed with a caring support system. The two behind DPKT are Durham locals who wanted to share their cultural cuisine with others via a food truck. Together they developed the brand, a video (that involved a two-day shoot), four tasting events and an overhaul of an old Fed-Ex truck. But one theme I kept hearing around me was COMMUNITY.   From former bosses, classmates, and family members they all supported them on this endeavor.

The COMMUNITY aspect started with the sharing food with family and friends, putting a little love in 1,200 handmade dumplings and the COMMUNITY responding by kicking in a few bucks to fund, sample, or eat the food.  When you meet those who surround Sophia and Sunny, they are enthusiastic and cheering them on.  And that spirit is infectious.  The brief moments I spent with them, you feel the urge to jump right in with them.  And while their truck is focusing on feeding the COMMUNITY, they also want to serve the COMMUNITY.  Already they are looking for ways to integrate the truck with community outreach programs in the Triangle area.  I haven’t even displayed the food and you’re probably a fan already.

While the food’s base is Asian, you will find local and Southern influences. For instance, the Five Spice Chicken and Waffles bring a fried spiciness, but a down-home country flair on the waffle. I was also not afraid to drizzle some local honey to get that perfect 1-2 combo of sweet and spicy.

The other out of the box creativity is the Cheerwine Bulgogi Sloppy Joe. The nice, thinly seasoned Korean Beef paired with Cheerwine, all surrounded by a delicious roll. This is a sweet, savory combo that you can easily grow to love.

For those looking for classic Asian fare will find this in the namesake of the truck with the Pho and Pork and Chive Dumplings.

The Pho starts with a nice clear rice noodle and participants were able to add items to their liking from the bar before adding a ladle of broth.

The dumplings were delicious with flavor as they were a steamed texture.

For the vegeterian they did offer a ramen salad which was a mixture of vegetables topped with dried ramen and a peanut dressing. For me the dark horse (listening to too much Katy Perry lately) is the Vietnamese Carpaccio. Nestled in a rangoon is a citrusy delight of beef. If you like ceviche, conch salad, or other dishes that are cool with lime juice, you will definitely like this. I have to admit I went in with a little fear, but hey #YOLO.

On display on the tables were a dessert option. A rangoon with yogurt and seasonal fruit. Since blackberries and raspberries are in season, they were used for the launch.

If I got you saying, I want some now! Guess what they are already schedule for a few events before going out full force. Here are some April events:

I have a feeling this is only a small spark of what we will see from these two.  I wish I could repeat the ideas that came out.  But if things align the right way, it’s going to be PK huge.